Log out? x
Are you sure you want to log out of Fueladream.com?
Yes
No
Help x
533

How do you tell a story without dialogues?

Read more about this silent film & why you should fund it.

The Topic: Does our CREATOR know what his CREATIONS go through?

This thought is what provoked me to make a silent film that attempts to answer this question. Trayam being a silent film has more film making challenges than the usual. 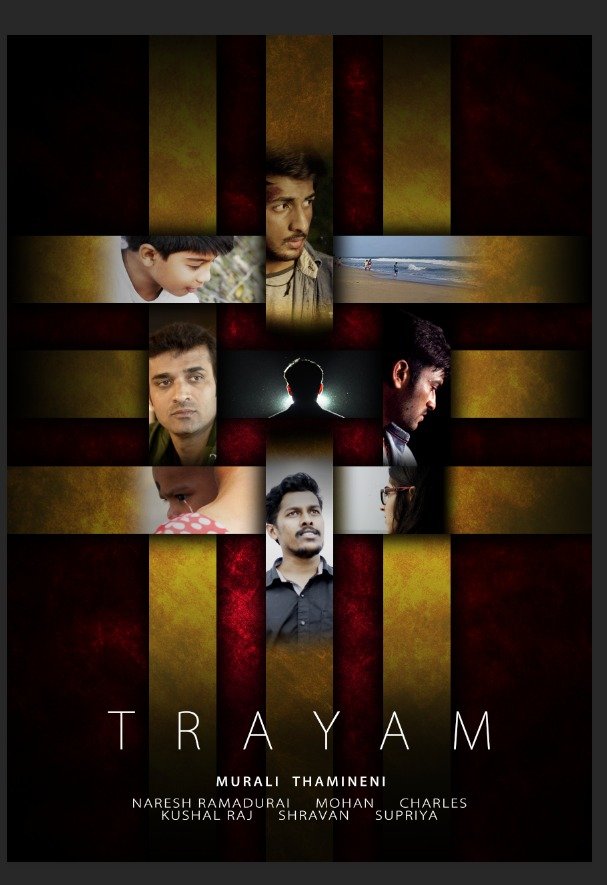 TRAYAM is my dream project. My name is Murali Thamineni – am 21 years old & a student at the Annapurna International School of Film & Media  (AISFM) in Hyderabad. The script is built around how the creator witnesses the reality of the everyday obstacles faced by his own creations.

The movie revolves around six major characters living incoherent lives and witnessing shortcomings in their daily lives. The characters include - A extremely poor street kid, an unheeding teenager, a depressed widow, an insatiable interior designer, a man in his mid 40’s who is on a trip down memory lane & last but not the least, god himself.

Every story has a common connection which has an underlying theme within it. It is basically a philosophical take on how life unfolds differently for different people. It is an honest take on struggles that humans go through in their daily life, which is shown through the perspective of six people.

This 30-minute film will not have DIALOGUES – the first 12 minutes will introduce the 6 protagonists & characters in the movie while the next 18 minutes is their story with a soundtrack.

The everyday occurrences and obstacles that will be depicted in the movie will make you relate to the movie & life in general. The movie is a philosophical take on the idea of the creator & his grief at the fate of his own creations. There is a force that drives you to live your life, but is the force good or bad?

My objective, my dream is to make this film, show it at film festivals, gain recognition & make a mark in the film industry. I NEED YOUR HELP to fund this movie & get me closer to my dreams. Fund India’s first 30 min silent movie & win exciting rewards.

Me and my team are looking at raising INR 3.9L through this campaign & as students we really need your help.

The cost breakup for this is as follows: 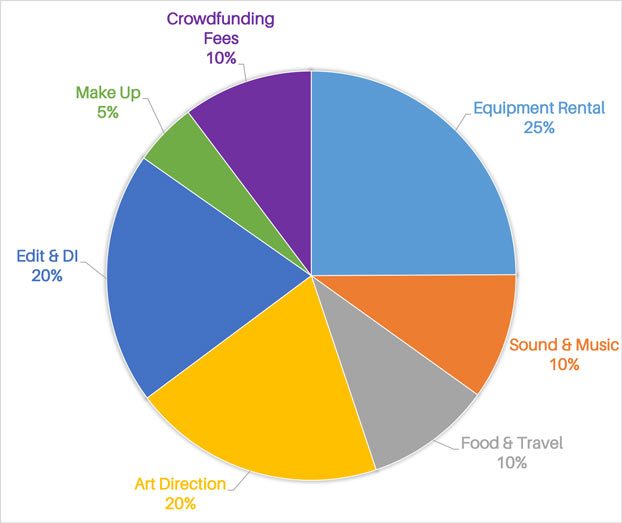 The costs are being kept low. Our cast & crew will comprise of 30 people. We will lease equipment, most of the cast are doing this pro-bono & the bulk of the cost is going towards equipment, editing (studio etc.) and art direction.

Silent movies in India made news 28 years ago when in 1987 the very successful movie Pushpak was released. Its starred Kamal Haasan, Amla & Tinu Anand. It was directed by Sangeetham Srinivasa Rao & won a National award plus was screened at Cannes and the Shanghai International Film festival. The original masterpiece in this genre was the Charlie Chaplin’s  film City Lights (1931) where he played the role of a Tramp! 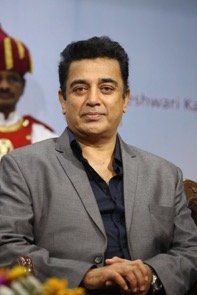 "We should know our history. Silent films are important and that's why we made Pushpak." 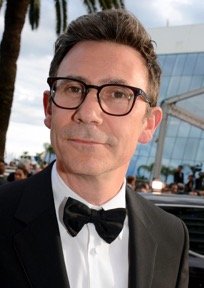 "This is the problem with language, and this is what makes silent movies fun, because the connection with them, me or the audience is not with the language. There’s no question of interpretation of what we are saying it’s just about feeling. You create your own story. Actually, I met a lot of directors and most of them have that fantasy to make a silent movie because for directors it's the purest way to tell a story. It's about creating images that tell a story and you don't need dialogue for that.”

"For you, it's a silent movie. For us, it's a talking movie because we had lines on set. There's a lot of noise on set and music. We spoke in English, in French, in gibberish, but it was very alive. The challenge was tap dancing. “ 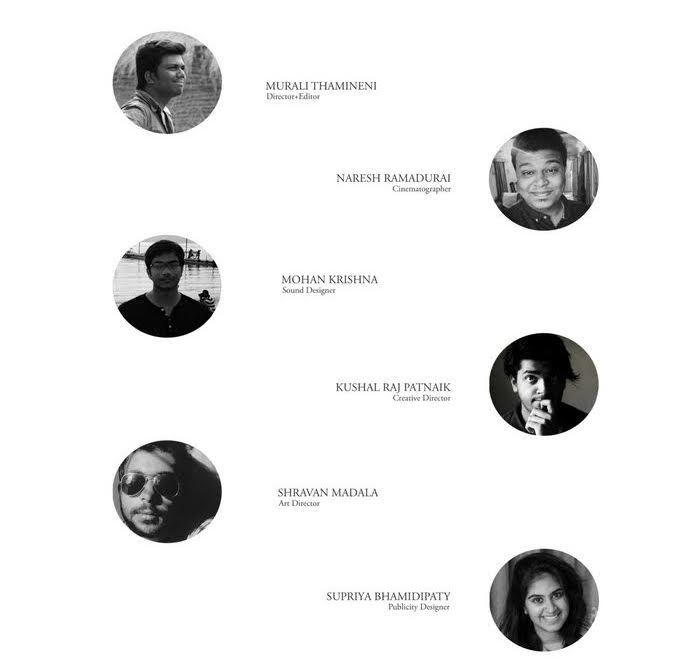 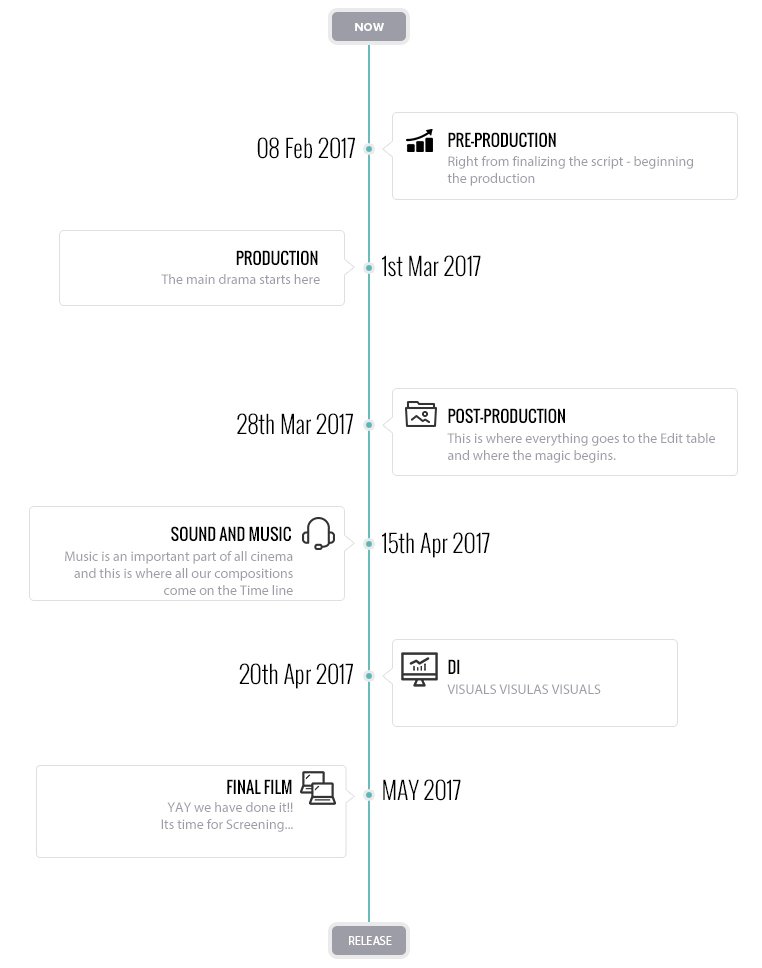 ABOUT MY TEAM & MYSELF:

DIRECTOR: I, Murali Thamineni am student of Annapurna School of Film and Media, at Annapurna Studios. My foremost passion is to make films that are worth watching.

Trayam is my dream project towards making a mark in the film industry. I have a lot of experience when it comes to film editing. Have worked in about 14 films, including college projects in various key roles and have interned as an editor for a few Tollywood films. I specialised in film editing & will ensure that Trayam is a well-made film.

Apart from editing, have done direction and this gives me the confidence to make TRAYAM.

Cinematographer: Naresh Ramadurai - Has an engineering degree in Electronics and Communication and a Master's degree in film-making specialising in Direction and Cinematography.  He has corporate work experience for four years while working for one of the largest banks in America. Visual arts is what lured him into the art and science of film making. He has worked in a feature film - Yathartham and also on another 20 short projects excluding 8 projects where he worked as the gaffer. He is currently working on 2 Telugu feature films.

Art Director: Shravan Madala - is in the final year of BFA Advertising from AISFM.  He believes more in visual storytelling than verbally conveying something. Tangibly signifying something is much more important to him than the intangible.

Sound Designer: Mohan Krishna - has a bachelors degree in Mechanical Engineering. According to him, the bug for filmmaking struck him when he was in higher secondary school which led him to choose filmmaking as a career. He has a Masters in filmmaking, specialising in Direction and Sound design. He has been as a part of good number of films in different roles such as director, sound designer and editor. This particular film is more challenging for him because it is an anthology film consisting of seven stories and each one has to be treated differently.

Publicity Designer: Supriya Bhamidipaty - has a Bachelor's in Mass media (Advertising) and is currently pursuing her MBA in Film and Media from AISFM. Her interest lies in marketing as she feels that in this age a product that markets well, sells well. Her hobbies include watching films and reading books.

Creative Director: Kushal Raj Patnaik - is inspired from what he sees around him and tries to recreate the art in various mediums like illustrations, photography and cinematography. He has been shortlisted in a lot of competitions across the world, some being Adobe Design Achievement Awards for photography and animation, Mumbai Film Festival for VFX and won the best Cinematography for a documentary Film. His interests made him to make a few YouTube series for travel (Drifting Nomads) and as himself (kushalrajpatnaik) for his A Thing A Day series. Currently he is working on a feature length script and a few short films. INR 1,000
Special Acknowledgement
Thank you for your contribution. You shall receive a shoutout on our Facebook page.
CLAIMED 0 Out Of 500
Delivery date: 03/2017
SELECT THIS REWARD

1 reward(s) selected.
Sign Up as a new user
Please wait...
Please wait...
Forgot your password?
INR 5,000
A Token of Gratitude.
Get a Official Movie related Merchandise and a special acknowledgement on our social media page.
CLAIMED 0 Out Of 100
Delivery date: 03/2017
SELECT THIS REWARD

1 reward(s) selected.
Sign Up as a new user
Please wait...
Please wait...
Forgot your password?
INR 25,000
Movie Time !!!
Thank you for your contribution. Will receive Premiere passes for the screening of the movie TRAYAM+OST+Merchandise+FB shoutouts.
CLAIMED 0 Out Of 70
Delivery date: 03/2017
SELECT THIS REWARD

1 reward(s) selected.
Sign Up as a new user
Please wait...
Please wait...
Forgot your password?
INR 40,000
Credit Reward !!!
Thank you for your contribution. Will be Credited in the rolling titles +visit to one day in post production of the movie + Premiere passes + Get to choose the Official poster
CLAIMED 0 Out Of 6
Delivery date: 03/2017
SELECT THIS REWARD

1 reward(s) selected.
Sign Up as a new user
Please wait...
Please wait...
Forgot your password?
INR 50,000
Co producer Credit
Your name listed as a Co-Producer on the film credits + Premiere passes + Special Acknowledgement at the beginning of the Film.
CLAIMED 0 Out Of 5
Delivery date: 03/2017
SELECT THIS REWARD

1 reward(s) selected.
Sign Up as a new user
Please wait...
Please wait...
Forgot your password?
INR 70,000
Executive producer credit
you will be listed on the screen credits (and on IMDB) as an EXECUTIVE PRODUCER of the film + Premier passes.
CLAIMED 0 Out Of 3
Delivery date: 03/2017
SELECT THIS REWARD